Industrial Photography Laws, Through My Lens

I live by the philosophy that’s it’s better to ask for forgiveness than permission. However, this philosophy only turns out for the better when you know your rights and boundaries as a photographer. Take for example the time I reached out to the staff of an industrial manufacturing trade show and was declined to photograph the event although the event was public.

Of course everyone there was tappy happy on their smart phones capturing everything and the chances were slim that I would’ve been detained for bringing my camera. So I decided to grab a few video clips. Did I make the right choice to ask the staff prior to the event?

It’s important for industrial photographers to understand the basic laws that impact our work and I understand if you fell asleep in ethics class. We’d rather take pictures than read books about law, right?

Cops and cameras are a suspicious combination and 90% of the time photographers aren’t out there to break laws while on the job but sometimes we skirt the boundaries in order to capture those atypical images.

Here’s a look at the laws through my lens told from personal experience.

There’s No Stopping Me On Public Property

I was once threatened by a police officer while doing street photography when I lived in Pittsburg. This was even prior to 9/11 and I was shocked. Although you have the right to photograph anything in plain view when standing in a public space, you may be confronted.

Those who would give up essential liberty to purchase a little temporary safety deserve neither liberty nor safety. ~ Benjamin Franklin

There has been a recent widespread phenomenon about revealing the truth behind what we eat. Documentary filmmakers are going behind the scenes of some of the largest factories and manufacturing plants in the United States to tell their stories.

There is a balance between the stories we want to tell and the laws we must obey and the magic happens somewhere in the middle.

On the industrial manufacturing side, I’m usually asked to sign a Nondisclosure Agreement (NDA). Even though I usually retain the copyright, I need permission to publicly show some of the work. Manufactures are always worried about disclosing trade secrets and reverse engineering.

Did you know?… British and American forces noticed that the Germans had gasoline cans with an excellent design. They reverse-engineered copies of those cans which were popularly known as “Jerry cans”.

Once on a shoot in Toledo the client needed images to show the facility capabilities but without revealing machines in action. In response to this dilemma, we took an inventive approach and ended up shooting abstract and detailed images.

Photographers are entitled to express their opinions and share their stories to educate, communicate and fuel business endeavors. There are laws that impact every choice we make in some way or another and we live within a constructed and developed society that embraces freedom of speech. 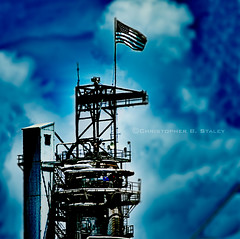 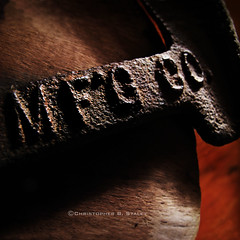